David Cordani became President and CEO of Cigna in 2009 and has spearheaded its transformation into a leading global health service company with an emphasis on empowering individuals to manage their own health, innovating new health delivery models, partnering with physicians to focus on wellness and prevention, and improving clinical quality. He is a prominent voice addressing how our society can build a more sustainable health care system which increases access, affordability, and predictability.

With operations in more than 30 countries and jurisdictions across the globe, David leads Cigna's 70,000 colleagues in improving the health, well-being, and peace of mind of those they serve. He oversaw the company’s successful combination with Express Scripts in 2018, and its launch in 2020 of Evernorth, a new brand for its growing, high-performing health services portfolio. Jointly, Cigna and Evernorth have more than 170 million customer and patient relationships, and more than one billion touchpoints worldwide.

David joined Cigna in 1991, and held leadership roles across the business prior to becoming president and CEO, in areas including distribution, clinical management, underwriting, finance, and operations. Prior joining to Cigna, David was with the accounting firm, Coopers & Lybrand.

Under Cordani's leadership since 2009, Cigna has:

He actively works with the Achilles International Freedom Team of Wounded Veterans. He also supports The Juvenile Diabetes Research Foundation. In addition, he is founder of The David and Sherry Cordani Family Foundation, reflecting the Cordani family’s deep commitment to supporting community health and well-being. David was named to the General Mills Board of Directors in 2014, served as Chairman of the U.S. Chamber of Commerce’s U.S.-Korea Business Council for 2018 and 2019, and was elected to serve as Chair of the Board for America’s Health Insurance Plans (AHIP) for 2019 and 2020. He also served on the U.S.-India Business Council Board of Directors from 2015 to 2017.

David is also the co-author of the best-selling book, The Courage to Go Forward: The Power of Micro Communities, which defines the unique, powerful role small, mobilized communities can play in helping individuals achieve their greatest goals or overcome obstacles - physical or otherwise.

David is an accomplished triathlete, having competed in more than 125 triathlons. He earned a bachelor’s degree from Texas A&M, and an MBA from the University of Hartford. 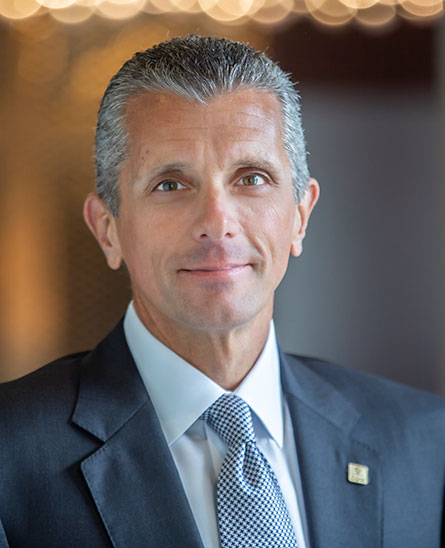