January 13, 2015, Hong Kong - Perceptions and attitudes towards overall ‘well-being' amongst the public in Asia and international markets reveal that good health matters. Cigna Corporation (NYSE: CI), a global health service company dedicated to helping people improve their health, well-being and sense of security, today announced the results of a major survey to monitor and track consumer motivations and perceptions.

"The Cigna ‘360° Well-being Score' is focused on questioning respondents on their attitudes towards health and their own particular personal perceptions of what makes for a healthy life and lifestyle," explained Mr. Jason Sadler, President of Cigna's International Markets business.

China ranked first overall in the survey's ‘360° Well-being Score' league table of Asia Pacific countries, which included South Korea, Thailand and New Zealand - with Hong Kong placing last, below even international countries such as the UK.

The majority of both China and Thailand's survey respondents also claimed that their overall health and well-being had improved over the last 12 months, at 54% and 48% respectively, whilst both Korea (77%) and Hong Kong (75%) believed they were either ‘no better' or indeed ‘worse' than before.

"The annual survey is intended to create an annual index or ‘score' that identifies and will continue to track and correlate the factors, motivations, perceptions and attitudes that impact a person's, as well the region's, health and well-being," Sadler added.

As well as ‘scoring' an individual's, as well as a country's, health and well-being perceptions, the initial Survey has thrown up some interesting general regional trends.

Firstly, it explodes the Asian work-ethic, ‘money at all cost' myth, as the findings actually show that, across all the countries surveyed, personal and family health, fitness and happiness ranks much higher than financial well-being - collectively, just 8% ranked financial well-being as the most important factor, compared to 54% for physical health and 33% for family well-being.

"This financial strain is most keenly felt across the region's forty-something's," remarked Mr. Sadler. "Our regional generational split findings show that whilst the 20-somethings are on the whole, generally happy, the ‘sandwich generation' of forty-something's, who are juggling children, work and increasingly elderly parents, are feeling the strain.  There is a clear financial, social and physical well-being ‘dip' where satisfaction of the overall well-being score drops, before recovering later in the 50's age group," he said.

The Survey also highlighted that financial health impacts physical health, with 37% of the region as a whole sleeping only six or less hours a night and 43% of those surveyed that say they don't get enough sleep citing financial and work worries as a primary cause.

"Today more than ever, we define health and well-being in a variety of ways. It's not only about our physical well-being, but our social, family, financial and work well-being also impacts how we perceive our overall well-being," said Mr. Sadler.

"In our fast-paced world, it has never been harder to achieve and maintain wellness across all these areas.  Staying healthy and well can be complicated and hard work. At Cigna, we hope to use insights from this survey to potentially develop new products and services that are simple to understand and easy to access; and also look to achieve what we call ‘Health Outcomes' - practical initiatives - either small or big - in each individual market, that can help improve customer's health, well-being and overall security."

"The Survey represents a key strategy in helping us better understand customers' needs and work together with them to help achieve healthier, more secure, lives."

The annual Cigna 360° Well-being Score' is an independent study, conducted by Ipsos, initially covering the APAC markets of Hong Kong, China, Thailand, Korea and New Zealand,  together with international markets including the UK. Data is collected online from a representative random sample of 1,000 people in each market, totaling 5,000 consumers across the five Asian markets.

As part of the on-going initiative, a Cigna 360° Well-being Score' online mini-survey will be launched shortly that will be available for members of the public in each market to assess their own personal well-being score and compare it against the national average. 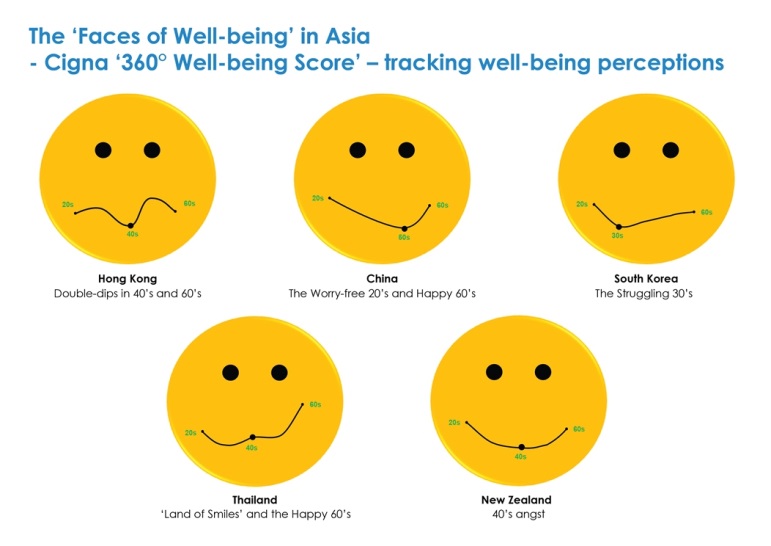 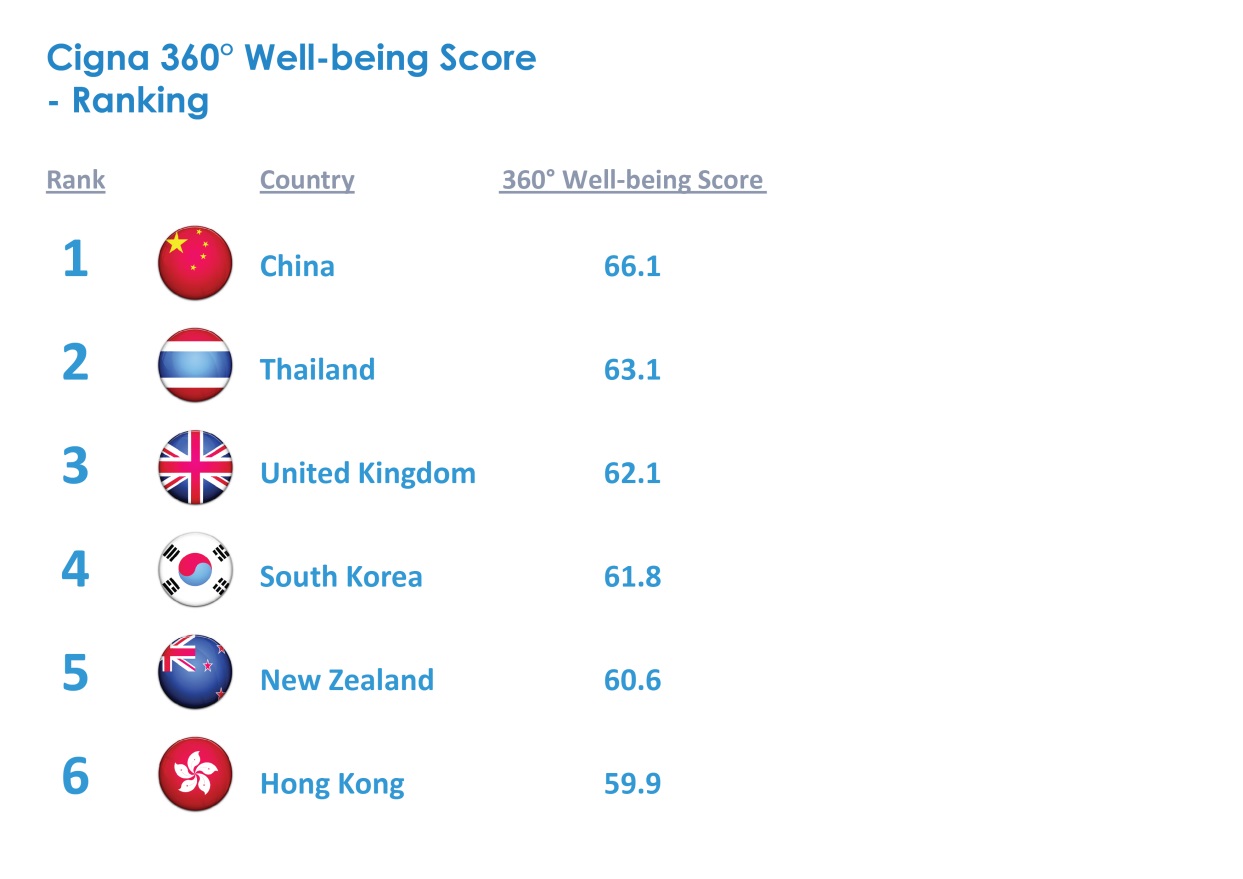 About Cigna
Cigna Corporation (NYSE: CI) is a global health service company dedicated to helping people improve their health, well-being and sense of security. All products and services are provided exclusively by or through operating subsidiaries of Cigna Corporation, including Connecticut General Life Insurance Company, Cigna Health and Life Insurance Company, Life Insurance Company of North America and Cigna Life Insurance Company of New York. Such products and services include an integrated suite of health services, such as medical, dental, behavioral health, pharmacy, vision, supplemental benefits, and other related products including group life, accident and disability insurance. Cigna maintains sales capability in 30 countries and jurisdictions, and has more than 85 million customer relationships throughout the world. To learn more about Cigna®, including links to follow us on Facebook or Twitter, visit www.cigna.com.

Other articles in News Releases: